Free binaural tools not just for the binaural researcher, for everyone

SONICOM’s coordinator, Dr Lorenzo Picinali (Imperial College London) in collaboration with partners, University of Malaga have developed a set of binaural software tools, for free. Originally developed as a research tool from 3D Tune-In Toolkit, a European Union’s Horizon 2020 research project, the people behind it have considered it such a useful bit of programming that they’re essentially giving it away for free!

The algorithm itself has been released as an open-source resource, and is available on GitHub, but non-programmer binaural enthusiasts can get in on the action too, thanks to a number of self-contained software tools that employ the same algorithm. For example, the Test Application programme is essentially a stand-alone spatialiser, into which you can load up mono WAV files and move them around a virtual space. Usefully, the Test Application speaks OSC (Open Sound Control), so using a phone, computer or tablet running one of the many freeware OSC apps around, you can perform real-time head tracking, and whizz your mono audio sources about in the virtual 3D space (see video below).

As well as performing immersive audio tricks, the Test Application also allows you to simulate the effects of hearing loss, or even of wearing a hearing aid:

What’s more, they’ve also packaged their algorithm into a Mac and Windows compatible VST plug-in, which they’re also giving away for free, as well as a Javascript version so that web and iOS developers can implement the tech into their own creations — again, with no restrictions as it’s all open source.

The Test Application, VST plug-in and Javascript versions can all be downloaded via 3D Tune-In’s GitHub, and this paper includes a browser-based demonstration that requires no additional software to run. 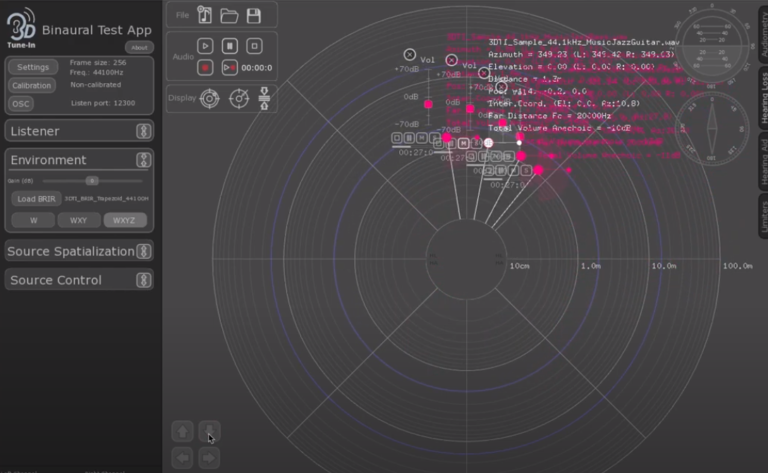