Imperial College London is consistently ranked amongst the top Universities in the world with a focus on four main disciplines: science, engineering, medicine and business. It is truly international, with 17,000 students from 125 countries and 8,000 staff, 50% of which are from outside of the UK.

Three departments from Imperial College are involved in this project: The Dyson School of Design Engineering was formed in 2014, building on decades of excellence in design and engineering. Their focus is on product, service, system and experience design, with particular attention to the integration and optimisation of technical, human, social and economic factors. The School hosts the Audio Experience Design (AXP) group, which includes researchers and projects in areas related with both the physical and the perceptual natures of audio, with focus on 3D audio interaction and user experience, as well as applications of immersive audio technologies.

The Department of Electrical and Electronic Engineering is one of the world’s leading departments in this area, both in terms of teaching and research activities. The Department hosts the Neural Reckoning research group, which carries out research aiming to understand the brain and intelligent behaviour more widely via theoretical and computational models. They are particularly interested in sensory processing, primarily the auditory system, where their goal is to understand how to make sense of complex and natural environments. 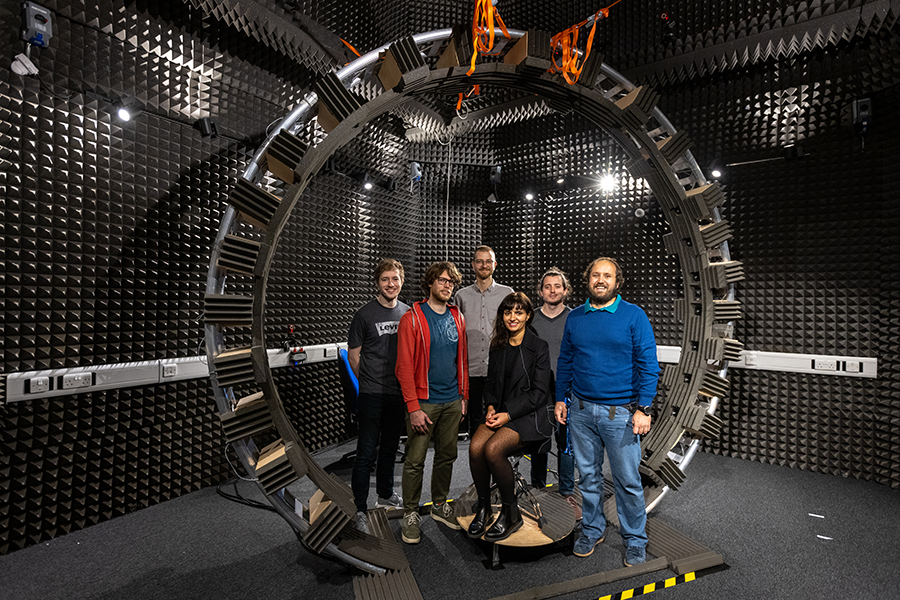 The Research Project Management office (RPM) supports academic-led, major collaborative programmes and projects through efficient consortium and project management. They are a dedicated team with over 15-years of experience supporting the full life cycle of multi-partnered EU and government funded projects from the early initiation and proposal stages through to funding, operational delivery, societal engagement, and exploitation of the work. They are currently engaged in the delivery of seven Horizon 2020 projects and one EIT-Climate KIC; totalling value upwards of €80 million and involving more than 50 partners all over the world.

Imperial College’s involvement consists of two main areas. First is the overall scientific coordination through project management (WP7) and the coordination of the dissemination activities (WP6). Second, is related to the involvement in various parts of the research work, from the core research in spatial audio (WP1) looking at AI HRTF modelling, spatial hearing perception, and real/virtual blending, to the social interaction work (WP2) contributing to the experimental design and setup, measurements and data analysis. The College will also support the implementation and evaluation of real-life scenarios (WP3-4) and will lead the WP5 LAP (Listener Acoustics Personalisation) challenge.

Lorenzo Picinali is a Reader in Audio Experience Design and the lead of the Audio Experience Design (AXP) research team with the Dyson School of Design Engineering. He worked in Italy, France and UK on projects related with 3D binaural sound rendering, eco-acoustic monitoring, interactive applications for visually and hearing-impaired individuals, audiology and hearing aids technology, audio and haptic interaction and, more generally, acoustical virtual and augmented reality.

Dan Goodman is a Senior Lecturer at Imperial College and has developed several software tools for working with spiking neurons, notably the “Brian” spiking neural network simulator. His focus is on sensory processing of complex, realistic stimuli, primarily in the auditory system.

Becky Stewart is a Lecturer in the Dyson School of Design Engineering at Imperial College London. Her research is in wearable technology with a focus on binaural audio and textile interfaces. She is also investigating methods for enabling research innovations to be more accessible to applications designers.

Michele Geronazzo‘s research activities focus on the modelling and simulation of complex human-systems interactions in virtual/augmented reality. His main interests involve binaural spatial audio synthesis and sound in 3D interactions. Michele is employed as  (tenure-track Assistant Professor) at the University of Udine (Italy), and is a Visiting Researcher at Imperial College London.

Siobhan Markus a Project Manager with the Research Project Management Office (RPM) at Imperial College London. She has worked on Horizon2020 projects for the past 2 years as lead of the Communications, Dissemination and Exploitation WP for six Horixon2020 projects. She is currently overseeing said WPs and taking care of the consortium, financial and administrative management of SONICOM.