Edited by SONICOM PI Professor Michele Geronazzo, University of Padova and Imperial College London, and Professor Stefania Serafin, Aalborg University, the book brings together experts in spatial audio for virtual reality to tackle the design of 3D spatial interactions in an audio-centred and audio-first perspective, providing the fundamental notions related to the creation and evaluation of immersive sonic experiences.

“The basic and most obvious assumption that motivates this volume is: it is hard to live in a world without sound and it is hard in virtual environments (VEs) too,” says Professor Geronazzo. “The good news brought by this book is that Virtual Reality finally sounds plausible. Advances in several fields are now able to provide an immersive listening experience that is perceptually indistinguishable from reality which means that immersive sounds could make interaction intrinsically natural.”

Since 2015, the editors have organised the IEEE Virtual Reality workshop series “Sonic Interactions in Virtual Environments (SIVE)” with the mission of increasing the awareness of the importance of sonic elements when designing immersive virtual environments among the virtual reality community and junior researchers.

This volume aims to provide an organised starting point on which to develop a new generation of immersive experiences and applications. Contributing authors include interdisciplinary experts from the fields of computer science, engineering, acoustics, psychology, design, humanities, and beyond. This was designed to give to the reader a broad view and a clear introduction to state-of-the-art technologies and design principles, and to the challenges that might be awaiting us in the future.

Through an overview of emerging topics, theories, methods, tools, and practices in sonic interactions in virtual environments research, the book aims to establish the basis for further development of this new research area.

Their discussions cover an overview of the basic mechanisms of human sound source localisation as well as more complex concepts and processes, such as HRTF selection (system to-user adaptation) and HRTF accommodation (user-to-system adaptation). The potential of these two approaches are discussed, considering their combined use in a practical context, as well as introducing a few open challenges for future research.

SONICOM’s sponsorship to the project also contributed to its full transition to open access, and the full book can be accessed for free on the Springer website. 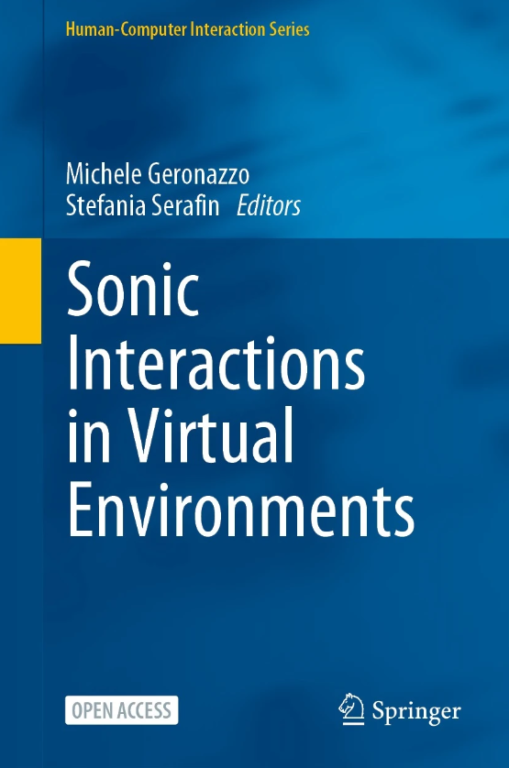